These spaces were where Béatrice would have received her guests. Visitors to the Villa were greeted by exceptional furniture, carpets with a royal provenance, paintings by the great masters... 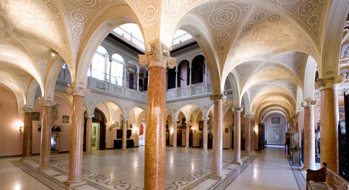 The patio was the place where Béatrice welcomed her visitors and held her receptions. Its architecture is inspired by that of Italian Renaissance villas. Most of the pink columns supporting the arches are made from Verona marble; the remainder are metal columns supporting the structure. Béatrice elected to conceal the latter with a clever trompe-l’œil technique, imitating the characteristic veins of pink marble.

Elements from churches or convents punctuate the décor of this room, the style of which is in stark contrast to the rooms surrounding it.
The decoration on the arches of the gallery surrounding the patio is copied from a Venetian palazzo. The suspended ceiling was originally decorated with a trompe-l’œil sky. 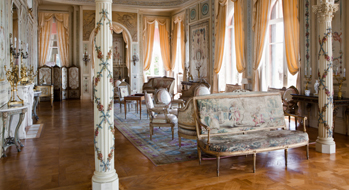 The grand salon, the most sumptuous in the Villa, looks out onto the Baie des Fourmis at Beaulieu-sur-Mer. It is the perfect illustration of Béatrice’s sophistication and pronounced taste for the 18th century.

The panelling that adorns the walls came from the Hôtel de Crillon in Paris. In 1907, this mansion was completely renovated to turn it into the palace that it is today. The former décor was removed and Béatrice got hold of these wall panels from the architect responsible for the work. The furniture is in the purer style of Louis XVI. The feet of the tables and armchairs are straight or tapered, unlike the curved feet of Louis XV style furniture.

The ceiling in the second part of the grand salon is decorated with a marouflage canvas by the Venetian painter Giandomenico Tiepolo depicting the chariot of Venus drawn by doves. Its exact provenance is unknown, but we know that Béatrice travelled regularly to Italy and certainly brought it back from there. The recent restoration of this canvas was financed by the Friends of the Villa Ephrussi de Rothschild.

Two large carpets on the floor. The first carpet was made in the time of Louis XV: two large, intertwining “L”s in gold can be seen in the centre of the composition. This carpet came from the chapel at the Palace of Versailles, where there were five of them, all made by the royal Savonnerie Manufactory. The four others were burned during the Revolution.

The second carpet was commissioned by Louis XIV. It was part of a range of 104 carpets that were also made at the Savonnerie Manufactory and designed to decorate the Grande Galerie at the Palais du Louvre.

The gaming tables. Béatrice liked to play all sorts of games. She regularly invited her friends to parties to play chess, bridge, poker or tric-trac. Here, we can see a small tric-trac table (a Far Eastern game which gets its name from the sound of the counters and was probably a forerunner of modern-day backgammon) and a whist table. The latter was created in the 18th century by the cabinetmaker René Dubois and was a gift from Marie-Antoinette to one of her friends. 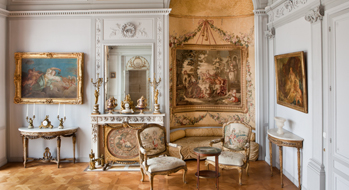 With its two alcoves, this room was designed for after-dinner conversation. It is decorated with tapestries from the end of the 18th century woven at the royal Gobelins Manufactory in Paris and depicting scenes from the adventures of Don Quixote.

The paintings. There are three paintings here from the studio of François Boucher: L’Amour aux colombes, Sommeil de Vénus and Diane sur les nuées. This ensemble of pictures is complemented by some charming dancers painted by Jean-Frédéric Schall, who made this something of a speciality at the end of the 18th century.

The marouflage canvas on the ceiling. This is the work of Giovanni Antonio Pellegrini, a Venetian artist from the 18th century. Drawing inspiration from Greek mythology, it depicts Phaeton losing control of the chariot belonging to his father, the sun-god Helios, and being struck down to prevent the world from burning up.

The fire screen. This bears the monogram AM of Marie-Antoinette and, in all likelihood, belonged to her.

The pedestal table. The pewter top is signed Compigné. It is gilded and painted with a view in perspective of the Palais Royal in Paris. The premier tabletier of King Louis XV, Compigné was famous for his scenes stamped in pewter, then gilded with gold leaf and painted.