Following government announcements, access to the villa and the tea-room requires the presentation of a vaccination pass. Find out more

From the Chinese room and tapestry room, to the monkey room and Fragonard room – each room offers visitors its own theme.

The Directoire bedroom and blue bedroom 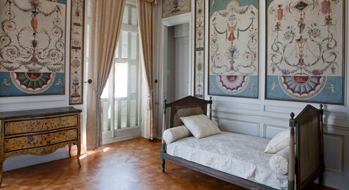 The décor in the Directoire bedroom, the paintings set in panels, includes motifs known as grotesques that were very popular during the Directoire period, between 1795 and 1799. These feature floral scrolls, suspended central motif, exotic animals such as ibis and monkeys, etc. This type of décor was inspired by antique decorations discovered in the excavations at Pompeii in 1748. They had a major influence on art in the second half of the 18th century.

With its generous size and triple aspect overlooking the sea and the gardens, the blue bedroom is one of the nicest of the rooms reserved for guests. It is decorated with Pompeian panelling from the end of the 18th century. The furniture is partly French, but also Italian, including the blue chairs with their pyramid-shaped feet. The ceiling holds an 18th century Meissen chandelier decorated with flowers, among which Béatrice had placed a small porcelain bird. This chandelier was electrified at the start of the 20th century. 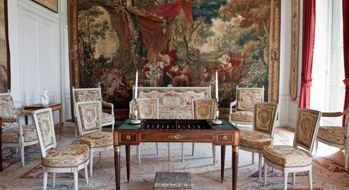 This room naturally takes its name from the tapestries adorning its walls and in particular the large tapestry of nearly 20 m2 hanging on the back wall. Made by the royal Gobelins Manufactory, its flamboyant red motif represents the homage of Bacchus to Ariane.

Two of the other tapestries were created based on cartoons by François Boucher. They depict pastoral and romantic scenes. One shows a young couple among the trees, sitting under the bust of Pan, the god of nature. The young woman’s gaping neckline exposes one of her breasts. She has lost her shoe and you can see the details of her toenails. This highly refined romantic scene was originally mounted in wall panels.

The furniture in the room is representative of the expertise of French cabinetmakers in the 18th century. In the centre of the room, the tric-trac table stamped by Pierre Garnier is further evidence of Béatrice’s love of games. It is surrounded by chairs, armchairs and sofas with tapered and fluted feet, upholstered in Beauvais tapestries.
The slant-top writing desk, made by the cabinetmaker René Dubois, is decorated with panels painted in various shades of green, which lends it its originality. The colours used as a rule during the period were greys and beiges. 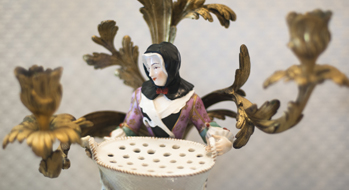 This small room is dedicated entirely to German porcelain, specifically the famous porcelain from Meissen, the Saxon manufactory that produced it from the start of the 18th century. In 1710, Meissen became the first ever manufactory of hard-paste porcelain, which had been created in the West.

In the display cabinet, several items remind us of the taste for chinoiserie that prevailed during the period: a strange elephant with the body of a pig, the ears of a man, a pipe-like trunk and the teeth of a carnivore, straight out of the imagination of modeller Johann Kirchner and Joseph Fröhlich, one of the jesters to the ruler of the Electorate of Saxony.

The Monkey room and Chinese Room 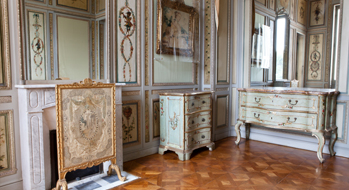 The monkey room takes its name from the décor in the room, where the monkey motif is omnipresent. The use of this animal in the decoration is not insignificant: monkeys were very fashionable during the 18th century and Béatrice owned two as pets. The décor in this room bears witness to the Baroness’s liking for the impertinence and freedom of the 18th century.
The panels all come from private mansions in Paris and feature monkey musicians: a trumpeter, violinist, conductor, singer... There’s an entire orchestra here. Above the mirror, there are more monkeys, for example, playing with flames, skating, doing acrobatics and drinking.

In the display cabinet, the small monkey musicians in Meissen porcelain are a rare level of quality. They form a second orchestra, echoing the first on the panels. This orchestra was a caricature of the court of Saxony. For example, the conductor, wearing the tallest wig, stamping his feet in his bright pink trousers and opening his mouth to show his long white teeth, would have represented prime minister von Brühl. This set was a phenomenal success – and caused a phenomenal scandal. It is one of the treasures of the collections at the Villa Ephrussi.

The Chinese Room contains what is known as “chinoiserie”. These types of objects arrived in France from the 17th century thanks to ambassadors from Siam, now known as Thailand. Between 1684 and 1686, the ships that accompanied them were basically filled with gifts for King Louis XIV.